In an effort to eat healthy, I try to create a meal plans and grocery lists on a weekly basis. Lately, though, I’ve found myself repeating the same old recipes. Staples of mine include healthy “burrito bowls,” chicken breasts with quinoa/brown rice and some kind of vegetable, salads…and then slight variations of all of those, with maybe a fish or beef dish here and there. This week, though, I decided to try at least oneee new recipe. And since I ate about 75 pounds of red meat while camping over the weekend (which was delicious, I might add), I especially wanted to try a new meatless recipe.

I have no idea what made me think of eggplant, since I usually detest eggplant (it’s so slimy and bitter and weird, right?). But regardless, my mind went to eggplant, so I didn’t resist. I decided to try to make eggplant parmesan, and the result was absolutely delicious–exactly what I was going for–flavorful, salty, savory, just a little spicy, and most importantly, oh-so-crunchy! Here’s how I did it:

3 eggs (I only had one egg, so I used one egg plus some egg whites)

I looked up online how to make eggplant NOT mushy and bitter, and I found an amazing tip that I was almost too lazy to try, but I’m so glad I did, and you will be too. The first thing you do is peel the eggplant then slice them into 1/4 inch rounds. Next, you’re going to arrange them in layers on a large plate and liberally salt each and every layer. Then, place another large place on top of the eggplant stack, and place a heavy object (a cast iron skillet or a brick will do). Let that sit for 20 minutes, and you’ll see a bunch of gross-looking brown liquid on the bottom. Dump the liquid out, and rinse the eggplant slices in a colander. Once the eggplant is all rinsed, place them on a towel for a few minutes to dry.

Now that the eggplant is ready, you’re going to set up your dipping station. In three separate shallow dishes, you’re going to put the flour in the first, eggs (beaten) in the second, and a mixture of the breadcrumbs and parmesan cheese in the third. At this point, you should also prepare two baking dishes (I lined mine with foil then brushed them with olive oil) and preheat the oven to 475 degrees. Dip each eggplant piece in the flour, then the egg, then the breadcrumb mixture, pressing the mixture into the eggplant to make sure it’s evenly coated. Shake the excess off and place on the baking sheet, then repeat until all of the eggplant is gone. Then, drizzle the eggplant pieces evenly with olive oil and place in the oven.

This is not a recipe where you can pop it in the oven and walk away. To ensure perfectly cooked eggplant, you will need to monitor them for about 45 minutes. After about 15 minutes, take the racks out, flip each eggplant piece over, and also transfer the baking sheets (swap the top and bottom sheets); then bake for 15 more minutes, and do the same thing; then bake for another 15 minutes. If the eggplant still isn’t a dark golden brown when you take them out, feel free to pop them back in the oven until they’re the desired color.

Here’s a picture of my eggplant cooking away (it smelled so good!): 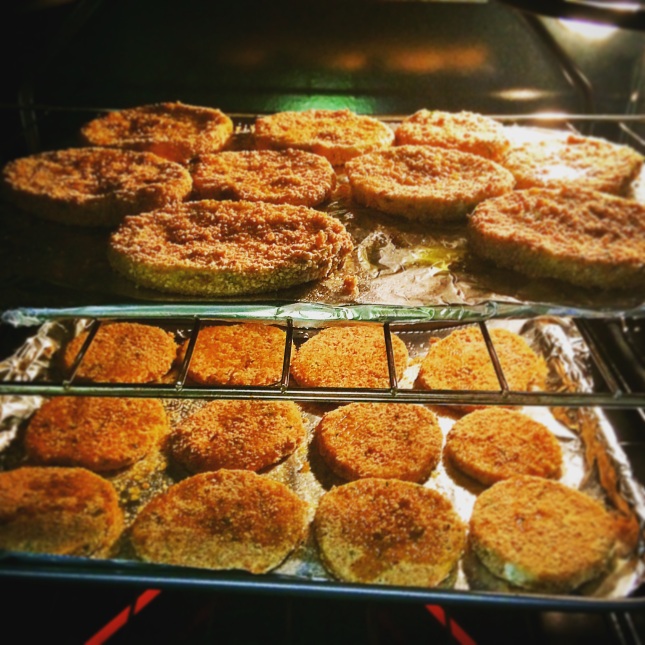 When my eggplant was done, I decided to get a little fancy. I first mixed marinara sauce with crushed red pepper and heated it up for about a minute. Then I arranged the eggplant in layers: Eggplant, marinara sauce, mozzarella slice, basil leaf, and then repeat. Here’s what the final product looked like: 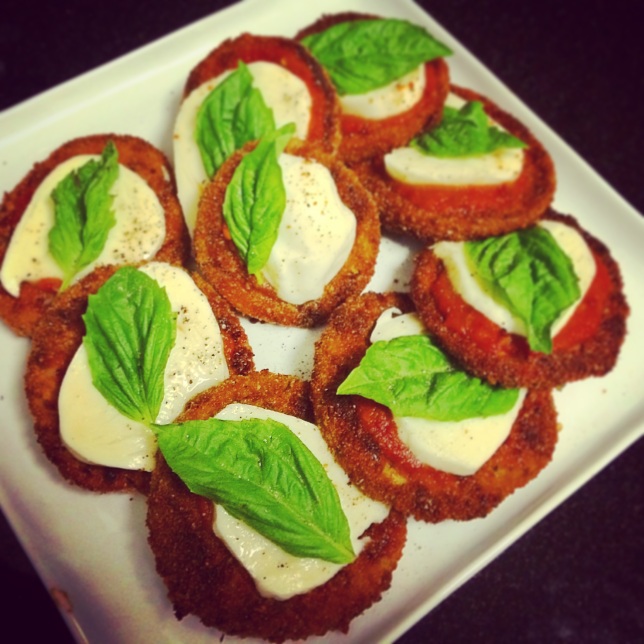 I decided to serve the eggplant with a side of angel hair pasta–when the pasta was finished cooking, I drained the water, returned it to the pot, and added a bunch of diced garlic, lemon zest, lemon juice and a lottttttt of black pepper (I love my black pepper!). Try this recipe out, and I guarantee you’ll love it! It might even change your mind about eggplant, as it did mine 🙂